Redis Sentinel is designed to monitor Redis Instance. It can automatically switch your master if it goes down or having some issue. Hence it will reduce the time for manual issue identification and switch. That will give us high availability,  that is why some people call it HA for Redis.

As per Redis team Sentinel does 4 things: Monitoring, Notification, Configuration Provider and Automatic failover. Redis Sentinel is used to monitor Redis Master Slave setup. If Redis Sentinel find a master is not working as expected then it starts a failover process, where it promotes the slave to master. In nutshell you can say Redis Sentinel will switch the master. All the other slaves are reconfigured or updated to use new master, by communicating new config. Application using Redis server is also updated about new configurations. We can also use Sentinel as service discovery, client can directly connect with Sentinel and ask for current master address. It will return new address in case of fail-over.

•    A cluster of Sentinel can failover a master even if some Sentinel are failing.
•    A single Sentinel not working well, or not well connected, can’t failover a master without authorization from other Sentinel.
•    Clients can connect to any random Sentinel to fetch the configuration of a master.

Redis2.8 refers to Redis package only. It contains Redis Server as well as Redis Sentinel.

Redis Sentinel Or Sentinel refers to Sentinel and is part of Redis package(majorly Redis 2.8).

“Sentinel 2”, is latest version as of today. Redis Sentinel 2 is shipped in Redis 2.8(latest version of Redis as of today).  “Sentinel 1” is buggy and advised not to used. That doesn’t mean you can’t use new “Sentinel 2” with Redis 2.6 Server or below.  You can install Redis 2.8 on Sentinel machines and let them monitor your Redis 2.6 server. But it will be good if you can migrate all your Redis Servers to Redis 2.8. Summary: Use Redis 2.8 to run Sentinel.

How to Run Redis Sentinel?

Redis Sentinel are very easy to setup. Here i assume that that you already have Redis Master Slave setup. if not, you can read here.

Redis package have a file called sentinel.conf that contains documentation with examples. You can delete all the content of sentinel.conf and add below lines to it.

First 6 lines of sentinel conf file are self explanatory and defines the configs of Sentinel daemon. We will explain other lines one by one below:

If you noticed we only defined the master address in config file. Here the Sentinel will fetch the slave data from master machine itself.

Any of the above methods will work, but sentinel.conf is mandatory otherwise it will through an error. By default, Sentinel runs on the 26379 port but you can change it in the config file.

Now you need to do the same thing on 2 more machines, which will end up a cluster of 3 nodes. All the Sentinel will coordinate with each other automatically. You don’t need to define the communication between them. Make sure the ports are open for communication.

If you are using a password in the Redis Master slave setup, don’t forget to define “masterauth” variable in “redis.conf” of both master and slave. When your down master will come up again, this is required. Otherwise, your old master(down master) will not be able to connect with the new master.

Check Redis Sentinels logs you get more idea, how it works: 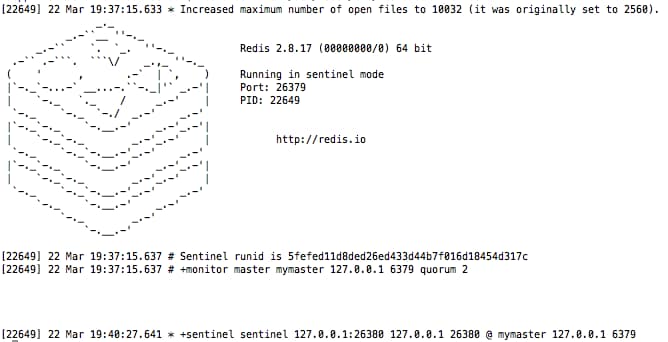 Logs of the Second instance are exactly similar to as explained above.